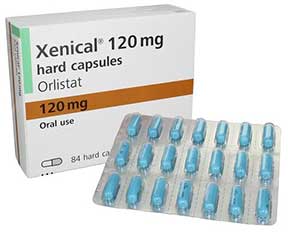 Xenical is a weight loss medication that’s only available with a doctor’s prescription.

Each Xenical capsule provides 120mg mg of the drug Orlistat, which belongs to a class of weight management medications and supplements that are known as fat blockers.

Like all fat blockers, Xenical has the ability to act on dietary fat when it enters the stomach and stop it from being absorbed.

Fat is a high energy food that contains nine calories per gram, and Xenical has the ability to block up to 30% of any fat that’s consumed, so taking the drug has the potential to lower the daily calorie intake by a significant amount.

The best time to take Xenical is just before eating, while eating, or shortly after eating a meal. This ensures the drug is active in the stomach while the maximum amount of fat is present. Taking it too early or too late would result in timing issues that could greatly decrease it’s fat blocking effect.

Xenical is a prescription only weight loss medication and so should only be obtained after consultation with a qualified doctor. On no accounts attempt to purchase from the internet.

The potential benefits and ramifications of taking Xenical are often misunderstood.

For one thing, the fact that it’s prescribed by doctors appears to give it extra credibility with people who wish to lose weight.

The truth of the matter is, a number of over-the-counter supplements offer a greater level of support and provide better results. The reason for the drug’s prescription only status largely stems from the fact that it’s use can entail negative aspects that require close supervision.

Another notable point about Xenical is it’s only intended for overweight adults who have a body mass index (BMI) of 28 or more.

People with lower levels of obesity will not be able to attain it at all and it should never be considered a magic pill. Xenical is intended to support existing weight loss efforts that are being made with diet and exercise and, when doctors prescribe the drug, they don’t just recommend diet and exercise, they insist upon it.

Anyone who fails to get with the program and make adequate progress will find their access to the drug is removed.

The fat blocking ability of Xenical is due to Orlistat’s ability to interrupt the normal action of a digestive enzyme called lipase.

Although up to 70% of any fat consumed will still be digested and provide the body with calories in the normal way, the percentage of fat that is successfully blocked will pass through the stomach and intestines untouched and exit the body with the stool.

However, although the idea of pooping away the pounds sounds good in theory, the fact of the matter is, people who don’t exercise the correct dietary constraints are likely to get more calories than they need from the fat that is not blocked and could continue to gain weight while taking the drug.

Due to the way fat blockers work, there is no point in taking them with a meal that contains little or no fat.

People who are serious about losing weight should be trying to eat this kind of meal more often and those who do so on a regular basis may find they start losing weight without the need for extra help.

However, the average Xenical user is unlikely to have such a low fat diet and there is always the danger that a love of fatty food could encourage the use of the drug as a cheat pill. Eating too much fatty food would be a big mistake.

Xenical is intended for people who consume a level of dietary fat that accounts for no more than 30% of their daily calorie intake.

Eating a greater percentage of fat would not be conducive to weight loss and would only serve to give the drug a greater mass of fat to block.

When Xenical is given too much fat to block it causes the stool to become unusually greasy and soft and it’s progress through the intestines may become so accelerated it could result in an urgent need for the toilet.

The possibility of vitamin deficiency can also be an issue for people who are trying to lose weight with Xenical.

A number of important vitamins, including Vitamin D (needed for an efficient immune system), are fat soluble and the body can only obtain fat soluble vitamins from dietary fat.

Prolonged use of fat blockers may cause the body to run short of these vitamins, so Xenical users may need to use an appropriate vitamin supplement to compensate for the vitamins they have lost.

What’s An Alternative Option To Xenical?

Xenical is a fat blocker. That’s all it does. Fat blocking is but one of a number of ways to prime the body for weight loss success. Most good diet pills are designed to offer support in multiple ways.

The one-pronged approach to weight loss offered by Xenical is very old-hat. PhenQ is an easily a better option than Xenical. It’s a multi action, multi benefit diet pill that’s a good choice for just about anyone who has the need to lose weight.

PhenQ contains an ingredient that has proven fat blocking abilities, but fat blocking is not its sole or primary aim.

PhenQ is an appetite suppressant, that’s geared to helping the body burn its excess fat, block the creation of new fat cells, and give dieters the full support they need to lose weight.

No prescription is needed, anyone can lose weight with PhenQ and, unlike Xenical, it’s a diet pill that comes with a money back guarantee.

Read the full review of PhenQ by clicking here