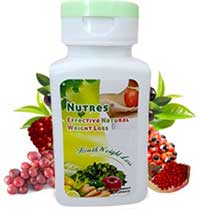 Nutres is a diet pill created by Nathans Naturals and the company says a single bottle can help dieters to shed 11lb to 24lb in four weeks. The prices shown on the official website are in American dollars, but the FAQs page says Nutres is made in the UK, so it’s difficult to say where the company is based. We checked the website’s contact page to see if it provides a location, but the only contact option was an email address.

According to marketing material, Nutres contains a powerful combination of Mother Nature’s most effective weight loss ingredients. Nine of them are shown in the form of small pictures. The FAQs page confirm the pills contain nine ingredients, but the ingredients page lists just seven. This is not an ideal situation because it means customers who buy the product will have no way of knowing what the other two ingredients are and it is possible one or both of them may not be suitable for them to use.

The page that is meant to describe how the product works fails to live up to its name, but it says the formulation will address four “imperative areas of weight loss”. It then goes on to list just three:

The FAQs page states the pills also provide appetite suppression, so it is safe to presume that is the other benefit the pills are designed to deliver. Unfortunately, none of the ingredients named on the site have the ability to deliver such a benefit. It is possible one of the unnamed ingredients will, but there is no way to know for sure.

How to Use Nutres Diet Pills

One capsule is needed each morning. A second capsule is required in the evening, and it is permissible to take both doses with or without food. No other information is provided.

The official Nutres website showcases a number of positive reviews, and one man reports a weight loss of 46 ½ pounds in six weeks. Unfortunately, all the reviews are probably hand-picked. Nathan’s Naturals would be unlikely to share comments left by people who claimed the pills let them down. Reviews published via a less biased source would be more reliable, but none are available.

Despite the fact that Nathans Natural state otherwise, Nutres is unlikely to be suitable for any woman who is pregnant or breastfeeding a child. People who have existing health issues would be wise to check with a doctor prior to using the product. Potential users who are taking medication are advised to do the same.

Where to Buy Nutres Diet Pills

Nutres is only available from the Nutres website. There are 60 pills per bottle, so each one should last for 30 days. Customers who order a single bottle of pills can expect to pay USD$ 19.95 (£16.35), but bulk buy incentives are available to anyone who wants to sweeten the deal.

There is no money back guarantee.

The Nutres formulation may be capable of helping dieters to improve on any existing efforts they are making with diet and exercise. Most of the ingredients have the ability to speed up the weight loss process, but good results will require sufficient quantities, and the amounts involved are not known. Customer reviews suggest the product works well, but they may have been hand-picked and cannot be relied upon to present an accurate insight into the kind of results the average dieter can expect. The lack of a guarantee is also an issue because people will not be able to get a refund if the pills let the down. We can’t say Nutres will not work at all, but we can say there are better options available.