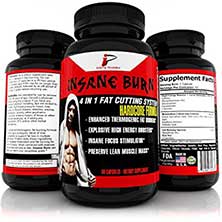 Insane Burn is a fat burning supplement brought to market by a company called Ignite Pharm and distributed exclusively via Amazon.

The company does not appear to have an official website and only produces one other product. It’s a female-only fat burner called Fit Chick and, like Insane Burn, it is also designed to preserve muscle tissue. That’s not all the two products have in common. A comparison of the labels reveals they contain the exact same ingredients in the exact same quantities. This is very interesting because Insane Burn has supposedly been formulated especially for men.

Further research revealed a number of other products, marketed by different companies, contain the same formulation. Reborn Labs have a fat burner “for her”, called Skinny Please. We also found an appetite suppressing fat burning combo called Phentamine HCL 37.5. All of this can only mean Insane Burn is a white label product. It also means the claims that the formulation is designed for women/men are pure hogwash.

The label on the bottle states Insane Burn is a hardcore 4-in-1 fat cutting system that provides:

What is Insane Burn and How Does it Work?

Insane Burn contains ingredients intended to speedup the fat burning process. The formulation also has stimulants to provide extra energy and boost mental focus. This should benefit anyone hoping to avoid diet-related fatigue or work out harder in the gym. The process of dieting can sometimes lead to a loss of muscle tissue, so the pills also contain ingredients to prevent this from happening.

Insane Burn is intended to be used in a cycle of 8 weeks on followed by two weeks off. Only one capsule is needed per day and it should be taken in the mornings.

Customer feedback is plentiful and predominantly good. It may also be biased because many of the people who sing the product’s praises admit they were given a discount in exchange for their review.

A couple of positive reviews read:

“These pills are a real game changer. They give me all the extra energy I need to workout harder and I can’t believe how lean and ripped I’m starting to become.”

“The energy this supplement provides truly is insane and its fat burning abilities are also good because I’ve been dropping 5 pounds a week. “

Two from the opposite camp read:

“These pills made me feel sick beyond belief and gave me a bad state of the jitters. Not recommended at all.”

“I was hoping these pills would shift some of my belly fat and help me to train harder. Never happened and I had to stop taking them after a week because I could no longer stand the constant feelings of nausea.”

Insane Burn is not intended for anyone who is under 18 years of age and Ignite Pharm states potential users who have existing health issues will need to consult a doctor prior to commencing supplementation. The company offers the same advice to people using medication.

Insane Burn appears to be only available from Amazon. Each bottle contains a 30-day supply of capsules and has a price tag of USD$29.95 (for £ sterling use a currency convertor such as XE.com

A money back guarantee is offered, but the duration is not specified.

It seems likely that Insane Burn will do most of the things that are claimed for it, because the claims made are a good match for the abilities of the ingredients used. However, the fact that some customers report side effects is an issue.

The pills contain several stimulants and it could be the quantities involved are too high for some people to handle. If you have a high tolerance of stimulants, you may want to give the pills a go. If you do not you will be better off giving them a miss.