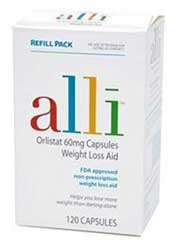 Alli is a reduced strength version of the fat blocking drug Xenical.

Like Xenical, Alli is solely powered by the drug Orlistat, but it only provides 60mg per capsule. Xenical provides twice this amount and is only available to people who have a prescription from their doctor.

No prescription is needed to obtain a supply of Alli, it can be purchased over-the-counter from Boots, Rowlands and most other pharmacies.

Although its true to say some Alli users say the drug works well and has helped them to lose weight, there are also a lot of people who say it did not help them at all.

It’s possible that the reason for such conflicting opinions lies in the way the drug has been used.

Like it’s prescription-only big brother, Alli is designed to support the existing weight loss efforts dieters who are already making with diet and exercise.

People who fail to eat a sensible diet and do not try to keep active are unlikely to see good results and may even continue to gain weight.

However, when used in the correct way, Alli can help dieters to improve on their existing results by around 50 percent. That means anyone who is already losing 1lb a week through diet and exercise could start to lose 1.5lb per week.

The Orlistat provided by Alli interferes with the normal function of a specific digestive enzyme. It’s called lipase and science has established lipase is responsible for digesting 10 to 30% of dietary fat.

Because Orlistat stops this important enzyme from doing its job, people taking Alli will obtain up to 30% less calories per day from the fat in their food. There are nine calories in every gram of fat consumed, so (when used correctly) Alli certainly has value as a weight loss aid. 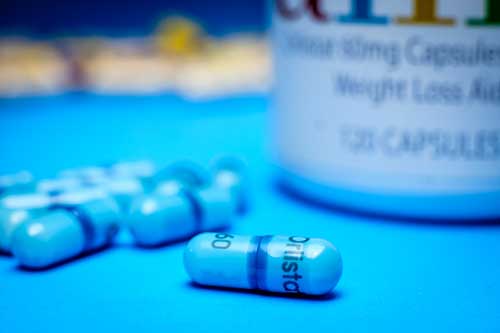 What Happens to the Fat That’s Blocked by Alli

When fat is blocked it doesn’t just magically disappear, it remains in the digestive tract and has to be passed from the body with the faeces.

However, the fat retains its normal consistency and texture and its presence in the faeces invariably makes it greasier and softer than normal.

The Negative Aspects of Alli Usage

Problems arise when people who are taking Alli continue to eat a lot of fatty food such as cheese, chips, burgers, and cream cakes.

Because the lipase enzyme has been rendered inactive, a greater amount of fat will pass through the digestive organs in an undigested state, causing the faeces to become so thin and oily, bouts of diarrhoea may attack at the most unexpected and inconvenient times.

The potential for vitamin deficiency is another important consideration Alli users need to bear in mind.

Certain vitamins that are necessary for good health can only be obtained from dietary fat. So people who are using Alli may need to use a supplement that provides them with the fat soluble vitamins their body requires (Vitamin A, Vitamin D, Vitamin E, Vitamin K).

Why Alli May Not Be the Right Diet Pill For You

There are a number of important considerations potential Alli need to keep in mind.

First of all, the medication is not intended for long-term use and should not be used for any longer than six months.

Secondly, it offers very little benefit to people who are purposefully avoiding dietary fat and successfully maintaining a diet that is extremely low in fat.

However, Alli’s real great failing is the restricted level of benefit it can offer. All it does is block a percentage of ingested fat.

Although the fat blocking ability of Alli can reduce the daily calorie intake, this is unlikely to be enough to help the average person to lose weight.

Controlling hunger urges is one of the greatest problems dieters face and Alli is incapable of taking hunger pangs away. Nor does Alli speed up the metabolism or do anything else that is likely to result in accelerated calorie burning or encourage the body to start burning its fat. Worse still, customers who buy Alli don’t even get a money back guarantee.

Alli is not a cheap diet pill to buy, so the lack of a guarantee is a big issue. People who are seriously overweight may be able to obtain the prescription only version of Orlistat (Xenical) and this will bring the price down to the cost of a monthly prescription.

Even then, neither version of Orlistat offers a great enough level of weight loss support and both options come a poor second to top-rated diet pills like PhenQ.

All the top diet pills offer multiple benefits, are suitable for long-term use, and have a money back guarantee to provide customers with extra peace of mind.